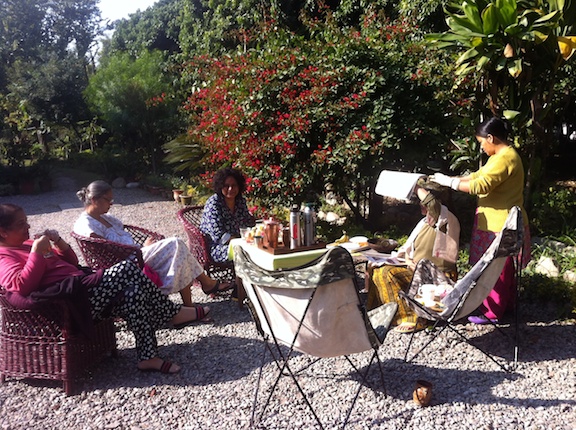 Next year we will have known each other for 50 years. We joined school as little girls with pigtails, today even our daughters are out of pigtails, yet we are still able to revert to that childhood and share the same laughter – it is the spa of friendship – which we revisit every year.

We shared the growing years, then grew apart to work, to nurture families and all the stuff that life involves. Some 6 years ago we all connected again to celebrate the 50th anniversary of the old school. Some of us had been in touch in bits and starts, some had been very far away, but that meeting probably came right at the time that it was meant to, we needed the reconnection and we needed that crazy bond that keeps us soaring.

We have spent the last few days together doing nothing in our very own spa full of healthy, home grown food, healthy oils and unguents – red henna and black henna experiments, mad stories and madder laughter. The old trees and gardens of a wholly quirky home allow for wallowing in the sunshine, the whole package allows for a rejuvenation of the soul with the sharing of every bitty, silly story and the whole hearted support of friends that will never judge.

Just how lucky were we that the parents left us at those grey gates to form these relationships that so importantly carry us happily through life.

I met a man. He looked at me with deep, intense eyes and looked and looked.  I smiled, I shifted, I perhaps even blushed, I squirmed, I shifted, smiled some more and moved away.

Uneasy! you bet. He looked some more, I squirmed some more. It’s the pursuer and the pursued, at some point you succumb, you chat, you laugh, you walk together you talk. There is an attraction – what is it? The fact that you enjoy the feeling of being wanted or the fact that it is actually an interesting man? Whatever, the actual fact in the forefront of the mind is that he is not free. Yet you are behaving like that puppy on the road, slowly being enticed toward that stroking hand – lord what a laugh, and you are watching yourself in glee waiting to see what you will do – it is an enjoyment of the forbidden and you don’t know the end. It’s like a drama unfolding all of your own making.

It is a taboo, a no no, for what reason? A sisterhood thing – you do not betray the sisterhood.  My best friend says ‘what nonsense, you are not betraying anyone, it’s not your business, why are you doing the thinking for someone else?’ Another says ‘ They don’t call them used or second hand any longer – the politically correct term is pre owned – that makes re owning better?

But it’s a rule I have – the whole damn thing makes for sleaze and hiding and the whole purpose of an attraction is to enjoy the damn thing – how do you do that if you are in hiding?

So, perhaps no. Then you spend more time and realise, hello, not just nice to be pursued, it’s a very interesting pursuer. So, you happily spend the time. You think; a flirtation, a jaunt, a moment in time.

Then you think some more – are you capable of loving many people, yes, so why is not another capable of the same. And then you think some more – you have not made a vow to love just one etc etc. You are not pre owned – so is it alright? At this point your brain starts to get fried and nothing destroys the equilibrium more than a fried brain. And nothing should destroy the equilibrium.

Quit out thinking – it is a moment in time. You meet a kindred spirit for a fraction of life, you enrich some portion of it for each other and keep the memory for rereading like a good book. Morality thy name is convenience in a used car lot!! 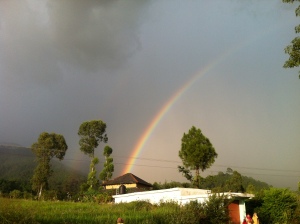 I met a man. I have met many and there are all sorts, so why did this start me thinking? Because I thought I had a type that attracts me and that is what I should stick with, else it does not work. Which brings me to the fact that I have been unstuck for the longest time!

I have been trying to sift this thought for the last 2 weeks. Attraction; what constitutes it? I am speaking now from purely my own perspective. I always thought, that for me the physicality was of supreme importance. That may sound hugely shallow, but that is what I truly thought my criteria was. Tall, dark and handsome, straight out of that teenage ‘Mills & Boon’. Stereotypical perhaps, but that is what attracted me. Dark, not dark, tall, was an absolute essential – see – the men in my family are large – that is my perspective of the species. You get smothered in a hug, that huge arm comes around you and the world becomes a safe place….!

Just one of those men in my family – my brother Hari.

Having said that, I married a man that my grandmother called a ‘pocket edition’. His mind however was huge, he was my best friend and I miss that still – because obviously with my stupid predilection for the other type, this lovely, gentle man with immense patience and a zany sense of humour and huge smarts, had no chance with a mad, maverick, person who needed to fly. But he is the one man that I still think of, respect and for all intents and purposes he has been the only man in my life.

Uff! that needs clarification – he is the only man that I acknowledge as an important part of my life. I have not been a nun, nor am I discounting the men that have participated in my life, made impressions,liaisons that have taught many lessons – all of those exist. But if I talk about a man in my life it is only ever that huge mind in a relatively smaller person.

So why do I believe that what attracts me is the tall, dark and handsome? Because I have come to see that as an ailment – a purely physical desirable object – nice to look at, nice to feel, nice to be on the arm of – but truly not necessarily nice at all. Many times just a block that functions on the good looks. Mostly self absorbed and so conscious of their attractions that they almost always feel they can do better than what they have – till they either find someone as dumb as themselves or find all the nice girls taken by those nice, smart, not so overtly good looking guys.

I am talking men here because being a woman that is the experience I have. That does not take away from the fact that as an observant woman I have seen the same syndrome repeat itself in the male psyche too. Infact it is larger than life there – how many men could you tell me, would actually go for the smart, intelligent, self assured woman? Oops! Is that really what you want, she will argue, she will challenge, she may not cook, she probably won’t pick up your socks – why would you want her? For conversation? You have the guys.

Now the question is for the women – the men have it pretty figured already. (There are exceptions and I do know men who want to walk beside their women – few, but they exist).

Do you go for that interesting man with the stimulating conversation, who can make you laugh, who  wants to take care of you, because he does value you and will try to please. But dear lord, he is small and not so good looking. He gets hidden in a large crowd, but when he starts conversing, the crowd maybe converges. Do you notice that? Or does that dreamy looking guy over there, standing over everyone and giving you the once over before he strolls across, make your heart flutter because he chooses you and so all eyes follow?

I came to the conclusion a while ago, that for me, the macho male energy is a repellent. It clashes with me and I so am not willing to have it in my life. I thought I could never have a man in my life on a permanent basis.  But I still ailed with the thought that the physical was an important point for me. How fixed one thinks one’s ideas are and yet a split second can change them or make you realize that you just thought you had them.

I learned what, obviously, my subconscious always knew – the mind attracts me more than the body. Though if the mind comes in a bit of a hunk, I am not running.