This is of holiday homes, travel and discovery. 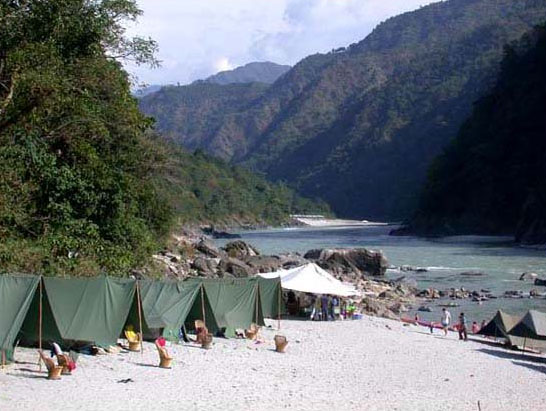 My home is a tented camp. I run very satisfying trips for myself and the people who come share it with me.They come holiday, have a break, raft some amazing white water, hike lovely hill trails, meet a culture and a people for whom time and distance have no measures. Like me they get a glimpse of a different perspective.Some have pure fun, some touch base with the earth and themselves. 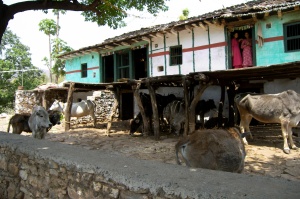 Know that feeling when you stand barefoot in the shallows? One wave washes the sand out between your toes, and the stresses with it. The next embeds your feet deeper and that rooted calm seeps up. Most go home replenished and rejuvenated. Some don’t, “there’s creepies in the tent, beasts in the night and sand in everything!” Discoverers all of us, in some way or other .

It wasn’t always so. I grew up loving the outdoors – swimming, sailing, riding, trekking, snorkeling, climbing. Walking through the fields, sitting by a gushing tubewell, fishing for tadpoles in the canal. If I’d been the son, I would have been a gentleman farmer, watching over my acres and seeing my crops grow. Quite content. A different story.

As it is. I married the right (very wonderful) man. I was a happy wife, became a good housewife, became a happy mother, I lived in a big house, ran a beautiful home. Entertained bankers and CEOs. For those around me, I had it all. It just didn’t seem like it to me. 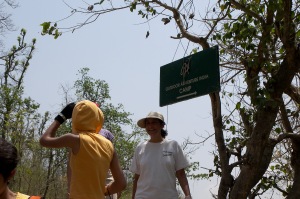 The only tenuously right thing, for me, I seemed to be doing was helping friends run an adventure tour outfit.
I opening a similiar one of my own, in partnership with a colleague. It limped along for me as I limped along, still trying to be the perfect homemaker & mother, fulfilling a preconceived notion of how it was meant to be. The task loomed like an unclimbable mountain.

Coming upto the river and camp, running a trip – was like coming home. I was happy, fulfilled, I felt successful. But the guilt loomed – like I was running away, should get home and face the responsibilities. That magical river seemed to be watching it all. Probably decided a sharply taught lesson in building and rebuilding, choices and decisions, and the inevitability of flow, was in order………

For those of us who live on the banks of the Ganga, she’s a friend, soulmate, provider and playmate. I lie on her 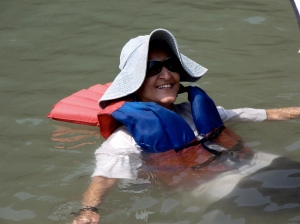 waves and feel the most comforting sense of solace and peace. She not only washes away sins, but also fear, pain and sorrow. The same waves toss you playfully in a kayak and tumble a 20 foot raft like a handkerchief in a washing machine. She had always been benevolent and providing.

We woke one morning, after three days of incessant, unseasonable rain, to a swollen, brown river.
She’d risen some seven to eight feet through the night and was lapping just outside my tent. It was still raining and she was still rising visibly.

The people already in camp were evacuated. The group meant to arrive was stalled.

The staff and I started taking down tents closest to the water as fast as we could. Setting marker rocks to ascertain the rising water; praying and believing it would stop soon. We’d never seen anything like it. 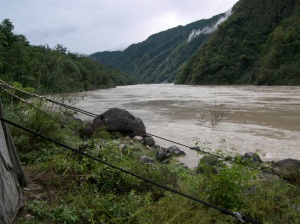 She didn’t stop. All the tents came down, wet and heavy they were dragged and dumped from high ground to higher ground to still higher ground. The kitchen tent being located above what we considered the high water
mark, was left for last. The whole day had gone in manhandling gear into the forest above the beach. With dark setting in and no beach left, we clambered through the forest to the kitchen tent. Water lapped just outside, still rising. A raging torrent flowed past with piles of debris whirling along in it’s angry spread.

It was time to abandon it all. Pulling gear out of the kitchen with water lapping at our ankles we finally abandoned the kitchen tent to the river – it was too late to save it.

There was nothing more to do, it was dark, we were tired, wet and cold. We sat under dripping trees amidst our piles of semi salvaged equipment- beds, trunks, life jackets, potatoes and bread scattered through the forest
and along the path leading to the road. Every so often we moved higher and watched as she grabbed a tent, a pole, a crate of drinks that we were too tired to move.

She rose all night. We abandoned our camp to the monkeys and any life that chose to make use of it for that long rainy night and went to Rishikesh town. Wet and chilled with all our worldly possessions lying on the forest floor in the path of a wildly raging river.

The next morning dawned bright and clear. The monkeys had eaten all the bananas. The kitchen tent was wrapped around a boulder. The dining tents were buried under a fresh layer of flat white sand where earlier there’d
been rocks. 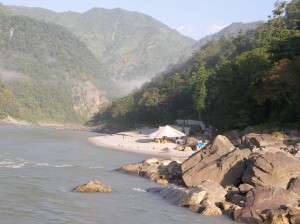 In two days the beach had appeared again. She’d lifted and flattened, added some sand here and taken some elsewhere. In a weeks time she was back to her sparkling green, lilting self and the only evidence of the
complete devastation was to be seen in the floor matting of the tents hanging in tatters from the tops of the trees above us.

Camp was dried out , up and running: it was hard work but it didn’t feel like it. It got done happily: the sun shone, the birds sang, tents got dried out and mended, kitchen got set up under the trees. It all got put together perfectly.

As I went about doing all this, the thought kept going around in my head – why is this so easy? From complete wipe out to rebuild with humour and cheer. No panic, no despair. The lesson needed to be applied to the rest of my life: choices that make you happy, not feeling guilty about chasing happiness; its not frivolous, it’s essential. Duty, jobs needing doing, responsibility all flow comfortably along.

A large home, a high flying job? Success needs to be an individual measure.

I am successful: I wake up and hug myself in glee, I do the same at night. My home is a tent on the river – if need be it will get bricked, mortared, thatched or tiled. My shopping and provision run is a twenty minute walk and a round drive of fifty two kilometres. I walk up to my jeep through the forest, new plants and flowers, myriad birds. I drive along a lovely hill road with beautiful views of the river and mountains. My suppliers in Rishikesh are friends, small town life has time. We catch up on news as my lists are checked and packed. 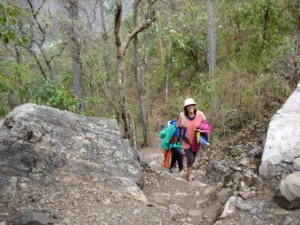 The power of dreams and the power of nature !
This is what I want to share with a host of us out there, whose dreams, much like mine, must be getting buried under a myriad humdrums and never become important enough! Please keep them and nurture them, it’s what
ultimately gives you that huggy, champagne feeling. The world becomes a great place to be.